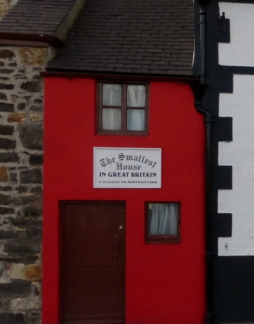 The Smallest House in Great Britain

The house is run by:

It manages to squeeze in a bedroom upstairs and a living area downstairs, with very basic cooking facilities and a water tap behind the stairs.  Whilst more suited to one, it had couples as well as single people living in it during the 19th century, as bourne out by the census entries across the century.

It was bought in 1891 by Robert Jones, well known in the local area as a land owner and fisherman, for £20.  A copy of the conveyance hangs in the Smallest House, showing that for that price, he not only bought the house but also acquired a sitting tenant with it, another Robert Jones!  Robert Jones (the tenant) continued to live in the Smallest House until 1900 when the local Corporation declared it and a number of neighbouring properties unfit for habitation.

Dismayed at the potential loss of income, Robert Jones (the owner) toured the country with his good friend, Roger Dawson, the editor of the North Wales Weekly News, measuring other small houses to see if it was indeed the smallest house in the country.  Having established that it was, the Corporation agreed that it could be saved from demolition and opened instead as a tourist attraction.

The Guiness Book of Records confirmed its status as the smallest house in Great Britain in the early 1920s.